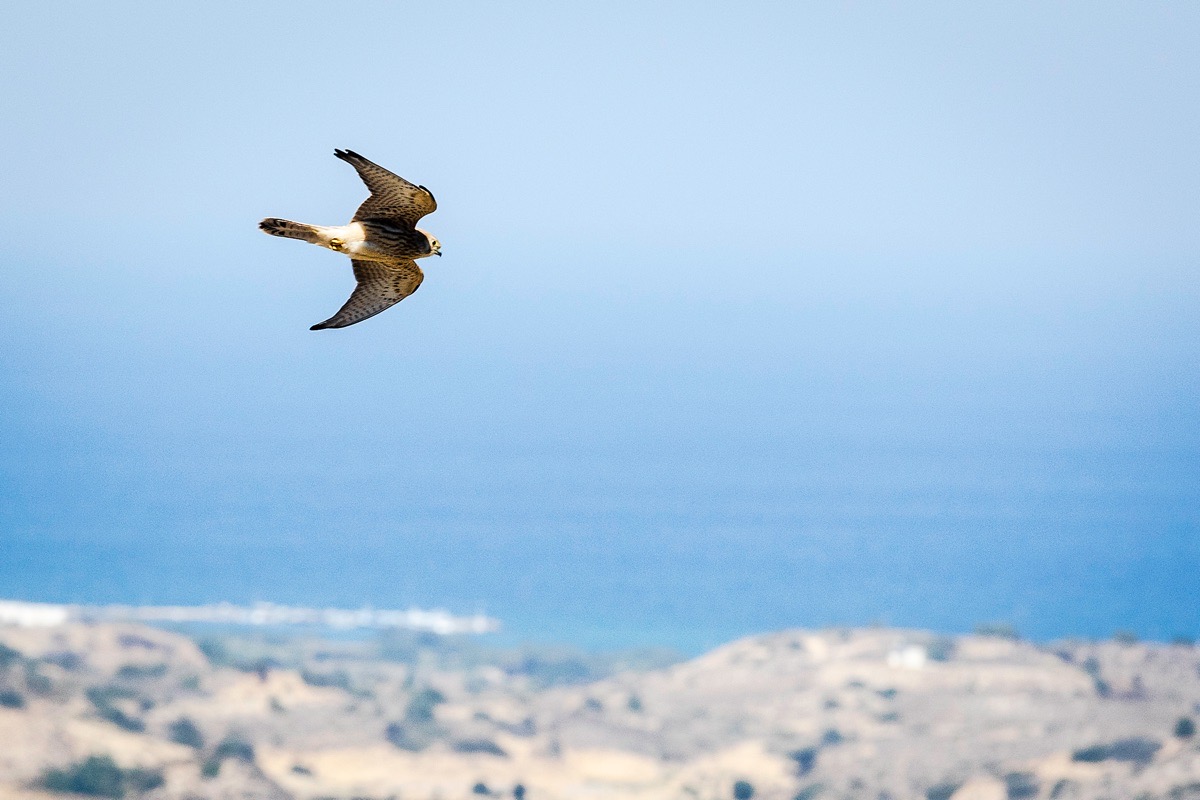 The album “Reach for the Sky” was released by Sunderland Brothers and Quiver in 1975.  The cover is very evocative and has an eagle flying across the sun.  My picture of the Lesser Kestrel flying over the valley between Kardamena and Pyli reminds me of that LP record.  It is one of many pictures taken on a day out with the wonderful photographer Sarah Longes (Twitter @miradordesign).  With my 200mm lens working to its limit, Sarah taught me to be patient on taking photographs. Not one of my strongest virtues but I am learning.

Sarah spotted where the lesser kestrels were hunting on the edge of the valley.  The view from our photography spot was spectacular and one of the interesting features were the large number of bee hives scattered across the landscape. Sarah has a sixth sense of where to find wildlife. I have known her virtually for a few years now and luck would have it we were both on Kos at the same time. She is a super photographer and teacher.

We left the Lesser Kestrels hunting in the mountains and moved onto Pyli to walk around the village.  Pyli features a natural water spring.  Although it was the heat of the day, there were several people filling up containers with spring water.  It was quiet when we visited, although two coach tours did descend on the area whilst we were having lunch in a local restaurant in the square.

Following lunch, we made our way to the Alikes Salt Lake that was next to the town of Tigaki.  The lake was teeming with wildlife in spite of the serious levels of pollution present.  The salt works are no longer operational and are visited by a few tourists and locals.  More interest is from the paragliding sails that pepper the horizon.  The salt lake was interesting with graffiti on old abandoned buildings,  several varieties of birds and even some turtles swimming around.  It was here that once again I learnt to be patient, as I photographed the birds, resisting my natural temptation to rush forward to get as close as possible.

Our final stop was the Traditional Windmill of Antimachia.  This is a restored windmill and the intricate sails were quite magnificent as they turned around.  I chatted to the owner of the Windmill and accompanying restaurant/bar and showed him Chesterton Windmill near Leamington Spa.  The owner was very interested, and I hope that I have forged an international link between the two windmills.

A memorable day and thank you to both Sarah for allowing me to accompany her on her photography tour and Simon her husband for chauffeuring us around Kos.  Hope you as the reader enjoy the pictures.

If you want to know more about Kos then there are two sites I would recommend,
Visit Kos Island Greece
Visit Greece

For the pictures of Sarah Longes then I would recommend her Twitter feed as she regularly posts there. Comment on her pictures and Sarah is sure to reply!

If you want to discover the song “Reach for the Sky” by Sutherland Brothers and Quiver then there is a YouTube link with the lyrics.