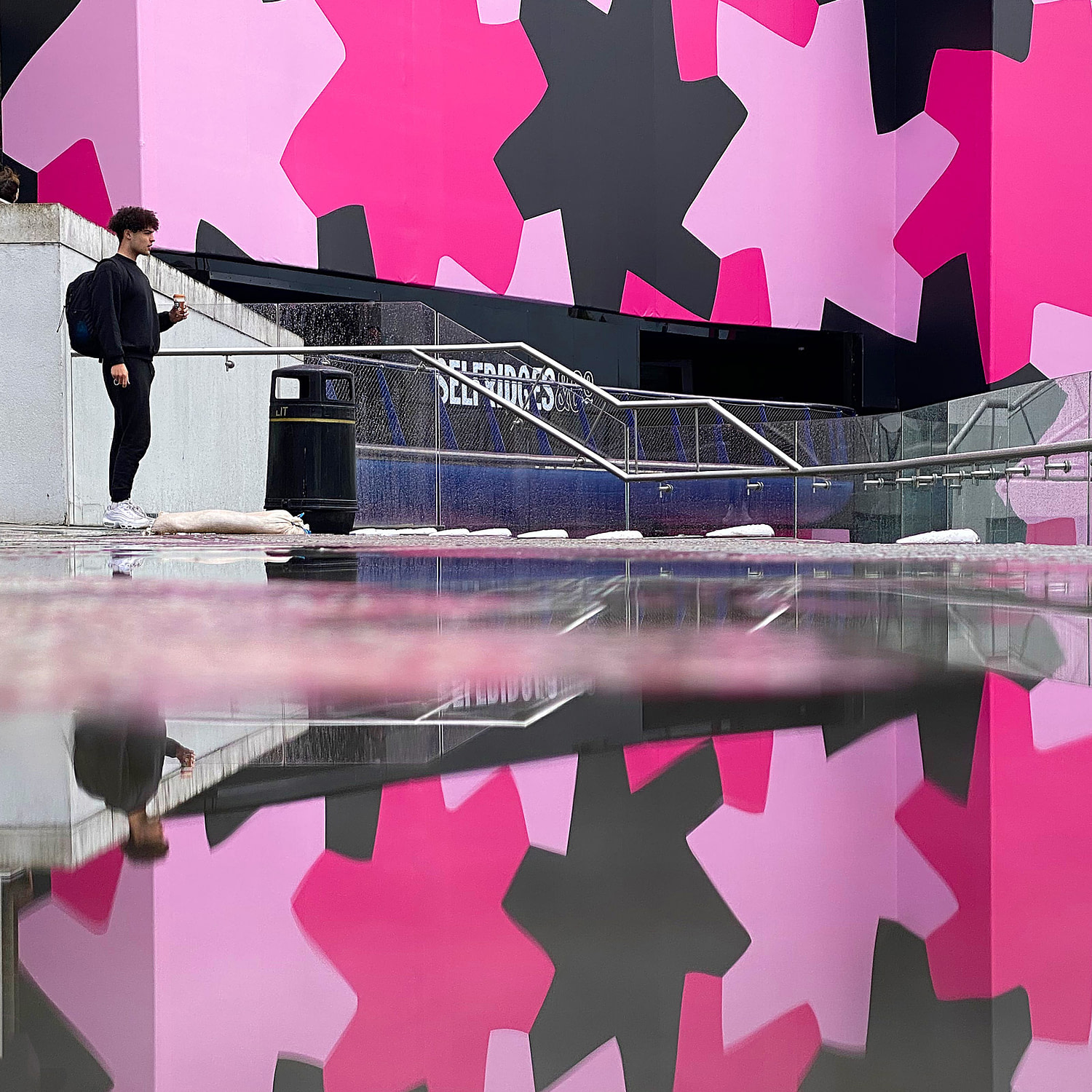 Selfridges is always on my list as a building to photograph. It has featured in many of my picture books over the years. I have even written a blog about the building which includes several of my pictures. The building is striking with the discs spread over an amorphous design. I love the building and it has come to be one of the iconic images of the City. I also like shopping in the store as the interior design is appealing but that is another story. If you want to know more, there are several good sources of information about the design and history of the architectural design.

In 2020, problems with the attachment of the discs to the building began to surface and this is evident in my pictures. A decision was made by Selfridges to undertake the refurbishment and replacement of all the discs on the building. There are 15,000 discs and it will take some time to replace them. The original makers of the discs no longer exist and new constructors were required. The story may be followed up in the news media when in November 2020, the official reports of the replacement began.

It was during Lockdown #2 that scaffolding began to go up around the store. So as to protect the construction workers and the scaffolding, an eye-catching temporary skin has been put in place. The striking art structure is called “Infinity pattern 1” and is designed by Birmingham born artist and interdisciplinary designer, Osman Yousefzada. It is intended to be a “message of hope” to the people of Birmingham. The design was drawn up in conjunction with the IKON Gallery. The colours are striking and are best viewed in the sunlight which picks up the shades of red. The installation is temporary as the replacement of all the discs will be completed in time for the Commonwealth games in 2022. Therefore whilst it is on view, I encourage you to wander down to Birmingham and see Osman’s creation. The visit will be worthwhile.

These photographs show how Osman’s artwork interacts with the City and the people. The pictures tell the story of the loss of the discs, the placement of the scaffolding and the final structure. There is merchandise in the store that feature the Infinity Pattern 1 on them. The colours and the design pattern lend themselves to pictures and I like the picture with my daughter looking out over Birmingham with the Infinity Pattern 1 behind her. Every year this arguably unremarkable square bursts into a riot of colour which is provided by the blossom on the two rows of trees on either side of the square. I am being harsh about the square, as it does have the IKON gallery which is an imposing building at one end. The blossom and the white pebbles of the square are beautifully offset by the IKON gallery. This display only takes place for a few weeks of the year. It is enjoyable taking the pictures and my iPhone picture of the square was featured on the late night news. 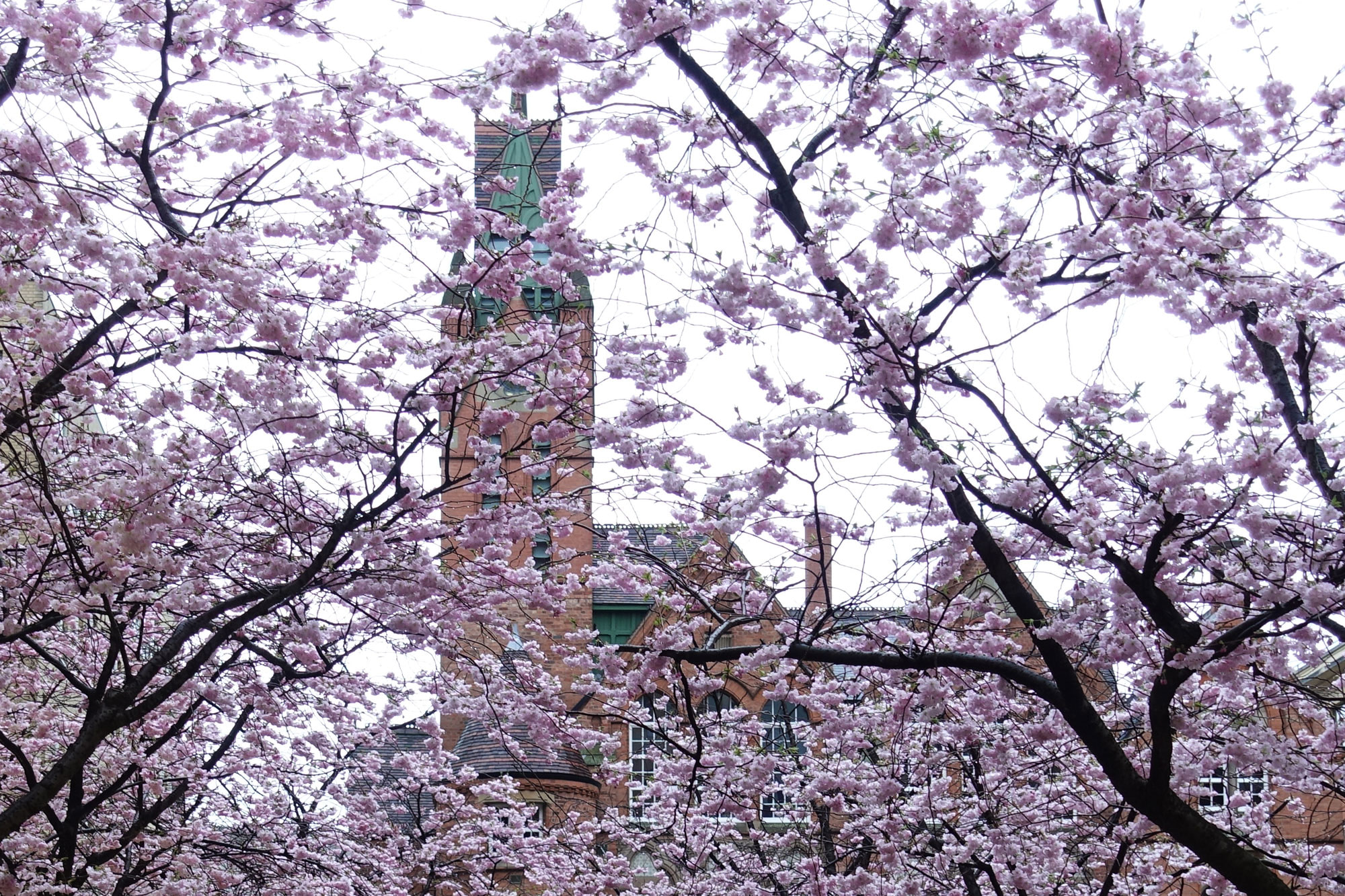 The Birmingham Gems Calendar is back and I am fortunate to have one Photograph in this years Edition. I have secured the month of May and it is when the blossoms are in full riot. The Ikon Gallery provides the backdrop to the pink blossom. Thank you to all at Birminghamweare and all the other brilliant photographers. If you want to know more about Birmingham or just follow the site which includes great pictures of the City by people with passion then here is the link

BirminghamWeAre – a Community of Passion 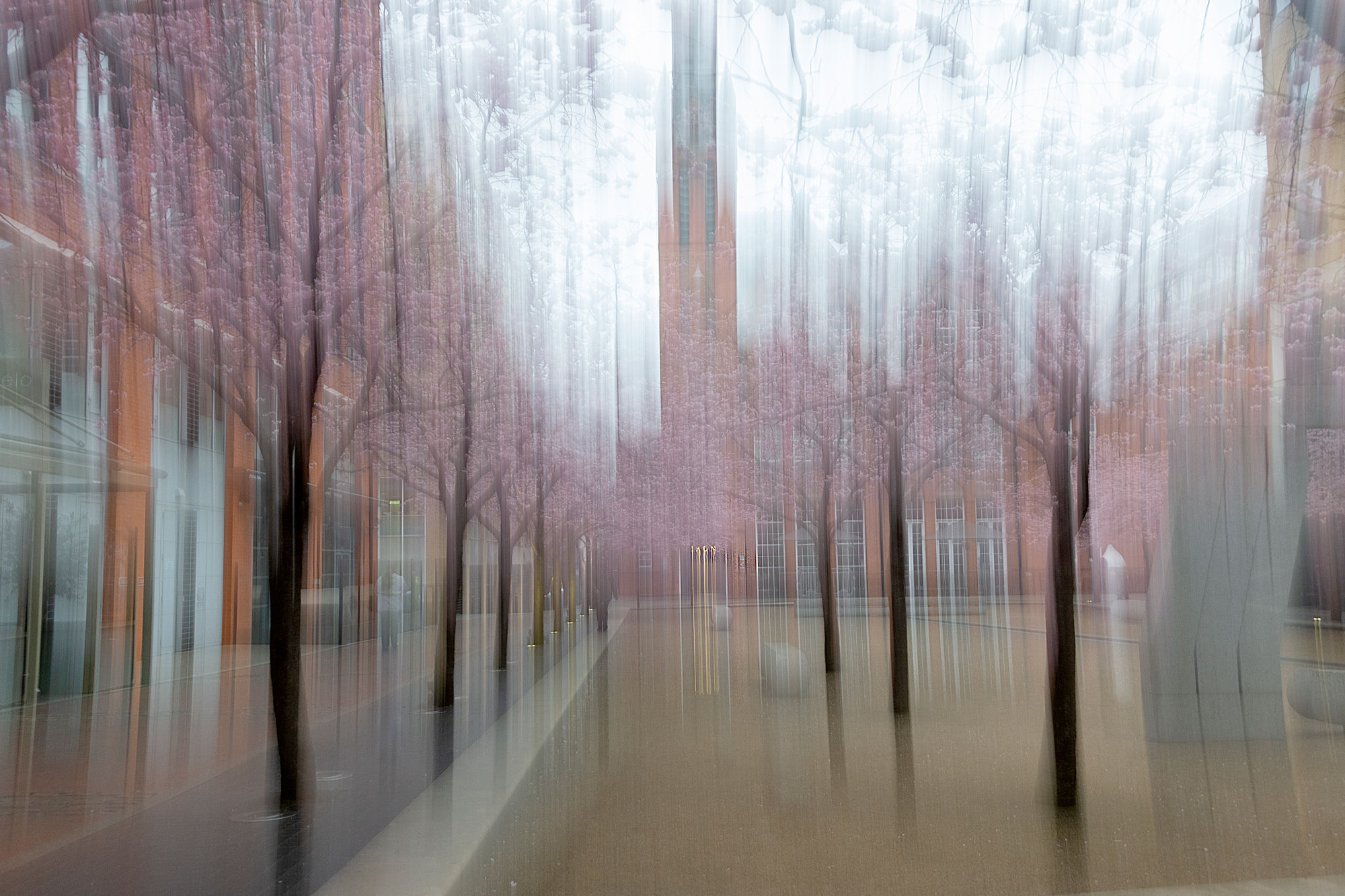 Oozells Square is just off Brindley Place.  It is a relatively new square and has a faceless RSB bank on the south side with the elegant IKON gallery on the North side.  Either side are a couple of restaurants which have their charms and are enjoyable places to dine the night away. The square is pleasant and whilst not unique does showcase the IKON gallery rather well.  For a few weeks in April, the square comes into its own with Cherry Blossom.  The trees erupt in bright pink and it is an attractive sight.  The flowering attracts most photographers in the area and I happen to one of those photographers that waits for this moment.  This year I wanted to be different by experimenting with a range of in camera methods.  I used several techniques including Intentional Camera Movement, Zooming and Double Exposure.  As an added bonus my iPhone picture was featured in the BBC weather bulletin that evening. 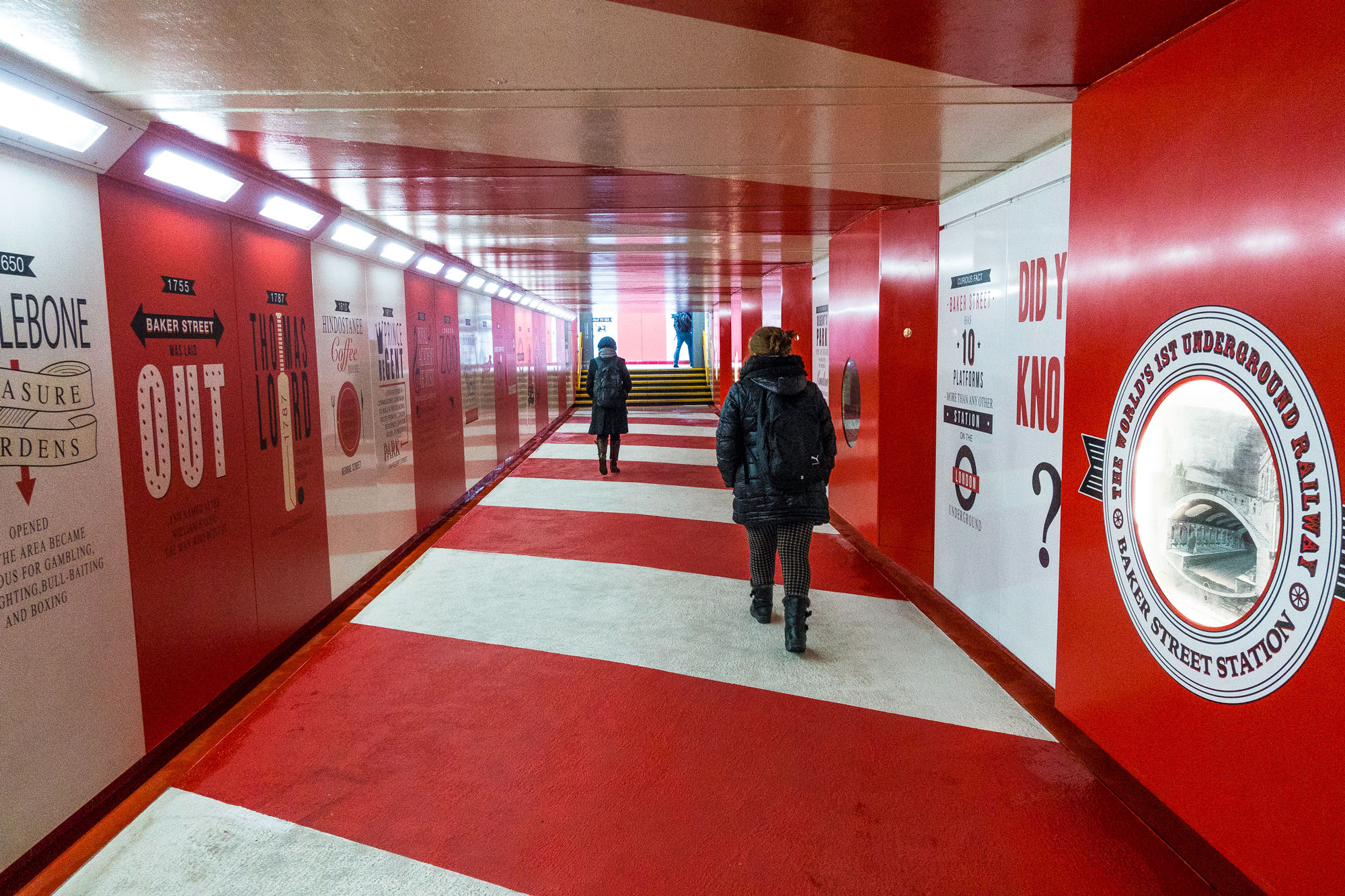 The End of a Perfect Day

On SUNDAY, I went out to take pictures of wildlife as I have access to a 400mm lens.  My runs along the canal nearby had revealed that a heron had made its home there.  So I set off with certain pictures in my mind.  I went up the canal bridge near to where I knew I had seen the heron.  The day was cold and bright.  The time was right as well, as it was coming up to around 4pm and the golden hour was almost upon me.  Then I discovered that several walkers passed me on the bridge and went into an adjoining field.  I went to investigate and the view was idyllic.  Path, farm house, setting sun and lovely colours.  I switched lenses to my 24-70mm and set up the aperture to see if I could get a sunstar.  I used my camera view and upped the ISO.  A couple of shots and I got a result that I was happy with.  Some minor editing followed in LR and PS.  The heron? I managed a few shots but none of the shots were as good as this scene of winter’s setting sun.
(postscript – as a bonus it was selected for publication in the Birmingham Post and Mail)
Camera settings – f-14, s-1/60, FL-24mm, ISO-250

The IKON gallery in Birmingham

MONDAY and I was at a reception hosted by the University of Birmingham at the IKON Gallery.  I have a camera with me at all times and the Sony RX100 is an ideal camera to have for pictures on the move.  It is very versatile and packs a lot of features into a small camera.  The evening was busy and there were few opportunities during the reception and the meal with presentations.  I was patient and at the end of the evening there was the opportunity to take an outside picture of the ICON gallery.  This place is photographed many times especially in Spring when the cherry blossom arrives.  This picture is processed in black and white.   The channel leads the viewer to the central building. I did notice that it was odd to see umbrellas/parasols set out in January but they make the picture look good with them set neatly in front of the lit windows.
Camera settings – f-1.8, s-1/30, FL-8.8mm, ISO-2000.

TUESDAY morning and I was working at the University campus.  I have some time to take a detour around Brum before I jump on the train to the University Station.  I take photographs of what I like and I had some good ones of the Cathedral in the light.   This telephone box does nothing really and just stands near to the Cathedral. It does feature in many pictures around Birmingham and the light from the street lamp makes it stand out from the dark morning.  In the days of mobile phones it is a remnant from a different era.   It was this photograph that I selected over the others.
Camera settings – f-2.8, s-1/40, FL-10.6mm, ISO-2500.

WEDNESDAY
A meeting in London always opens up new possibilities for taking photographs. I had a few ideas and when I got to Baker St, I used the underpass that goes under Marylebone Rd.  You have to love the red stripes and the surreal angle that they are set at.  It just cries out to be photographed.  I was also pleased to see that I had caught the people on the different coloured stripes which is a bonus.  I also took lots of other photographs but I discarded them in favour of this one.
Camera settings – f-4, s-1/160, FL-8.8mm, ISO-2500.

THURSDAY was a day of teaching and meetings.  I was taking it slow making my way to a meeting at the Mailbox only to learn on the way that it was cancelled.  I went slower and decided to take the towpath back into the City Centre.  I am glad I did as the little bit of sun we had lit up the Cube and its reflection in the canal. I had inadvertently left the ISO at 2500 but this did allow a good capture of the cyclists on the left.  A bright moment in an otherwise dull day.
Camera settings – f-4, s-1/320, FL-11.3mm, ISO-2500.

Thank God its FRIDAY.  I was not having a great deal of luck with taking a photograph today.  It was a dull day and many of my pictures looked dull and boring. This was taken going home from Platform 1 of Moor St station. You can see the dull sky in the centre against the relatively warm lights of the station. Taken with my iPhone and it constantly amazes me how it takes a reasonably good picture under different lighting conditions.  A bit of touching up done in Google Snapspeed.
Camera settings – ƒ-1.8, s-1/6,  FL-4.0 mm, ISO 100

It is SATURDAY and at long last I get to use the Telephoto lens. I went to Brueton Park, Solihull, where the Warwickshire Wildlife Centre is based.  There was some wildlife around and for about 10 minutes there were two Goosanders in the large pond at the nature centre.  It is not easy to compose pictures and this is one of the better attempts of many I took during the morning. I need to tweak the settings a bit. This particular picture caught my eye due to the ripples. Wildlife photography is not straightforward and requires a lot of patience.  I will have a few more attempts over the coming months.
Camera settings – f-5.6, s-1/100,  FL-400 mm, ISO 500

And that was a typical week in January.