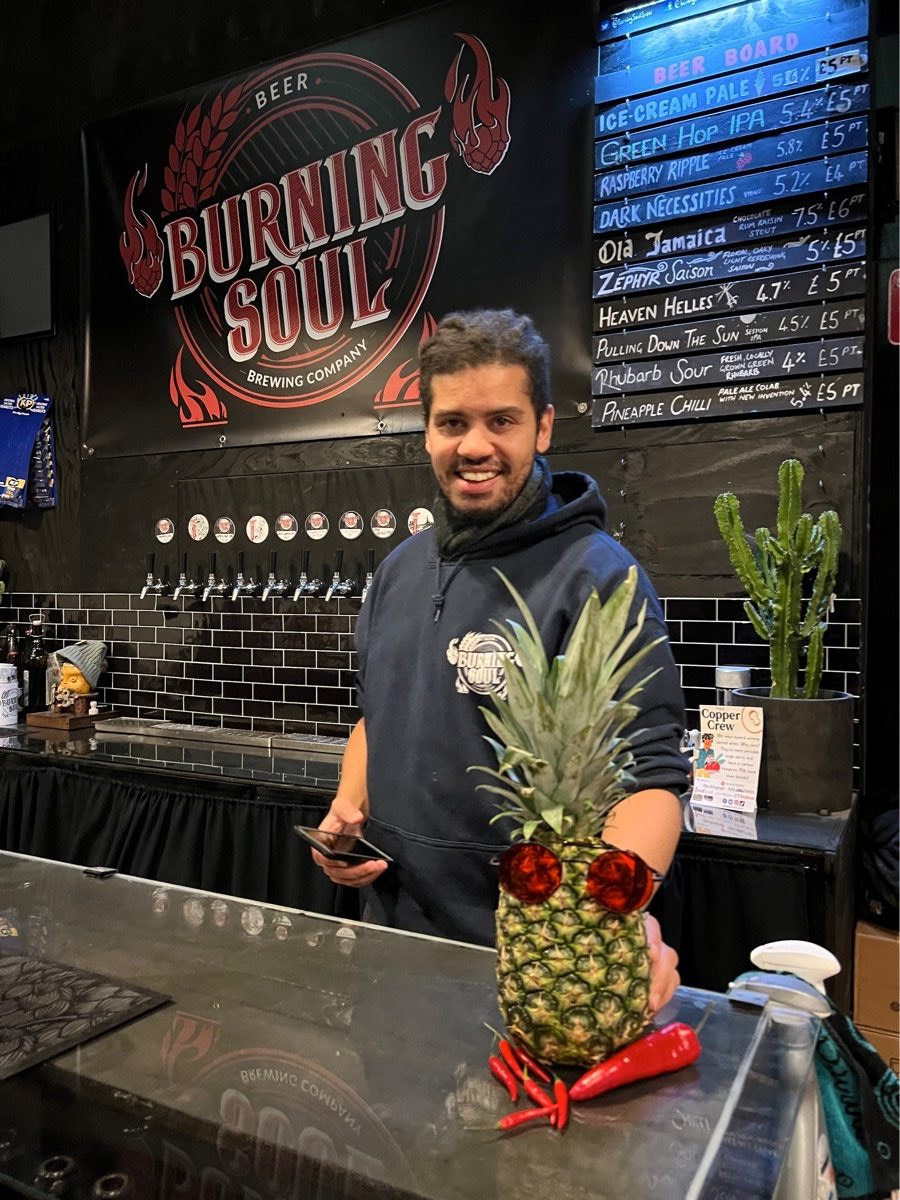 Craft beer breweries are increasing in number and Birmingham has around 15 of them.  Of those 15, I have visited the Two Towers, DigBrew and Birmingham Brewery over the years.  Time to discover some new ones and a Saturday craft beer walk was planned to start at the Burning Soul.  This brewery sits on the edge of the Jewellery quarter in an industrial estate just off Constitution Hill.  The colourful signs of the Burning Soul emblem greet you on their garage door.

You then enter a brightly lit room where Chris, the master brewer greets you.  Chris runs the place by himself and serves up some tasty beers.  Beers on offer include Ice Cream Pale and the house favourite Pineapple Chilli.  Both are very nice on the palate and provide a mixture of tastes.  The ice cream variety lives up to its name whilst the chilli is noticeable against the fruity flavour.  The mixture of fruit and chilli works and makes for a great beer.  Chris is an amenable host and showed us around.

Going behind the scenes, Chris explains the brewing process and how he comes up with the ideas for the beers.  We return to the bar for drinks and notice that the place fills up very quickly. Soon we are on our way to the next port of call the Rock and Roll brewery on Hall Street, near to the centre of the Jewellery Quarter .  Whilst the brewing is done downstairs, the first floor is the lounge area with the bar.  The walls are adorned with Rock and Roll memorabilia and whilst there were no bands playing during our visit, there is a small stage for performances.  Both Rock and Roll and Burning Soul have worked together on several beer projects.  I purchased a couple of their cans to bring home with me.

After an enjoyable stay our next tasting session was at the Halton Turner Brewery in Digbeth.  This is a recent addition to the Digbeth scene, and it is based under the arches on Trent Street.  Whilst the Burning Soul and Rock and Roll breweries were in warm premises, the brick arches surrounding Halton Turner are a touch on the cold side.  Drinking beer in this brewery does require the wearing of warm clothing.  This is not to distract from the beers which like the other two are well worth tasting.  In summary all the establishments have wonderful character, the beers range in taste and style.  There is something on offer for everyone.  An enjoyable time and a wonderful stroll down the independent side of Birmingham.

All Pictures taken on my iPhone13 and I lived to tell the story after drinking all the beer!