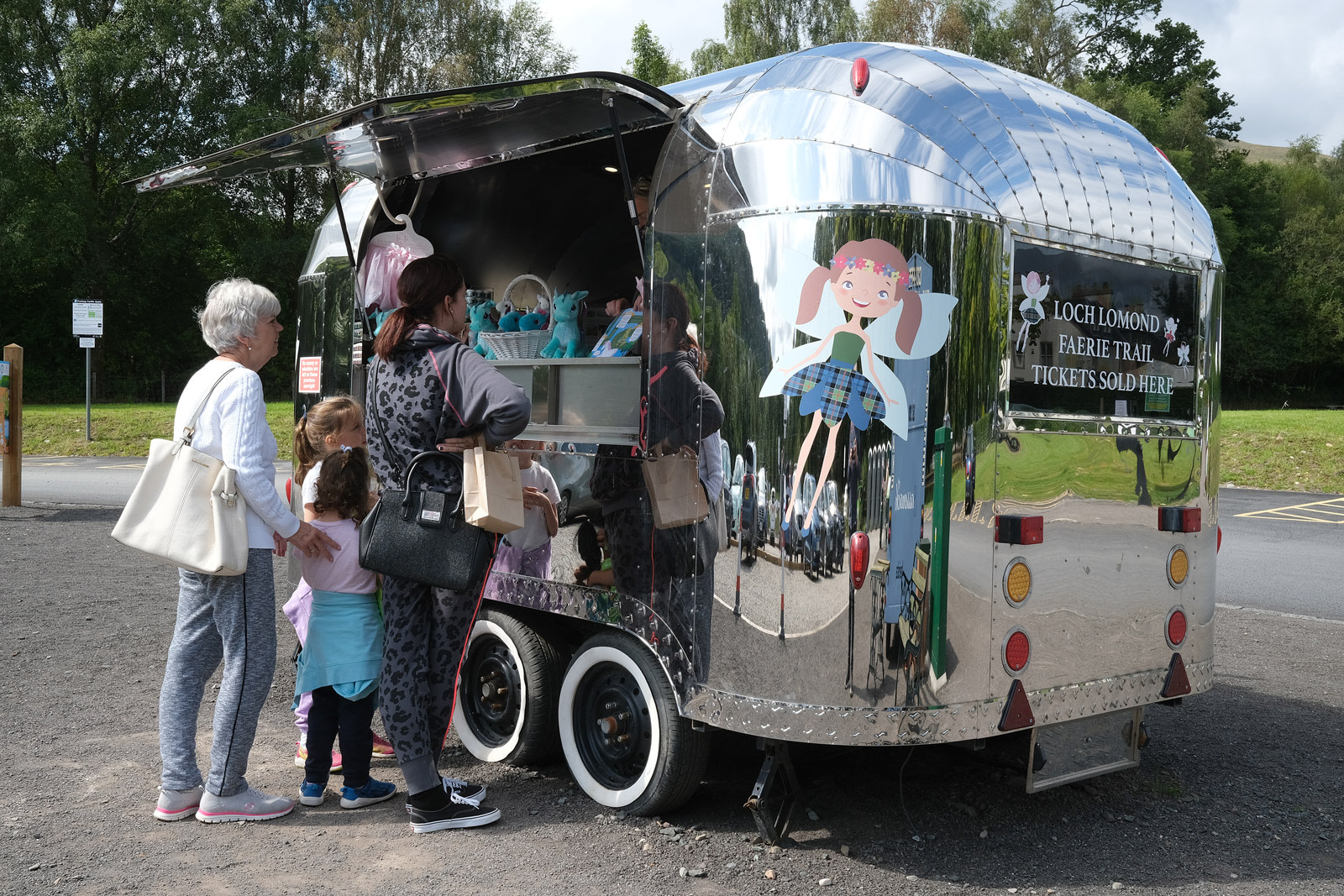 We spent a great deal of time during our holiday visiting this beautiful village on the banks of Loch Lomond. Luss is Gaelic for herb and the village was so named after St Kessog. As Irish missionary to Scotland, he was martyred, and the legend is told that herbs grew on his grave.

The village of Luss is characterised by the neat row of cottages that once belonged to the slate quarry workers that worked in the surrounding area. The appealing thatched cottages built by the Laird around the village have slate roofs, as timber was in short supply.  Now they are a popular tourist attraction, and the main street leads down to Luss pier.

This is the focal point of the village where there are ice cream vans and holiday makers taking advantage of water sport activities.  There are also beautiful views of the Luss Hills and Ben Lomond with their peaks reflecting on the water.  Luss church is away from the tourist track and has a quiet atmosphere as it sits overlooking the water.

A feature of Luss is the nearly developed Faerie trail which my granddaughters loved and takes in the nearby forest and river valley.  You buy your tickets from the Airstream trailer in the Luss overspill carpark before heading off into the forest and meeting the Faeries.  Luckily no Trolls can be seen as they are all in School learning how to behave. Luss is a delightful place to stay and is a perfect base for exploring Loch Lomond and its surroundings.

Here is more information on Luss and the Faerie Trial

All pictures were taken with the Fujifilm x100v 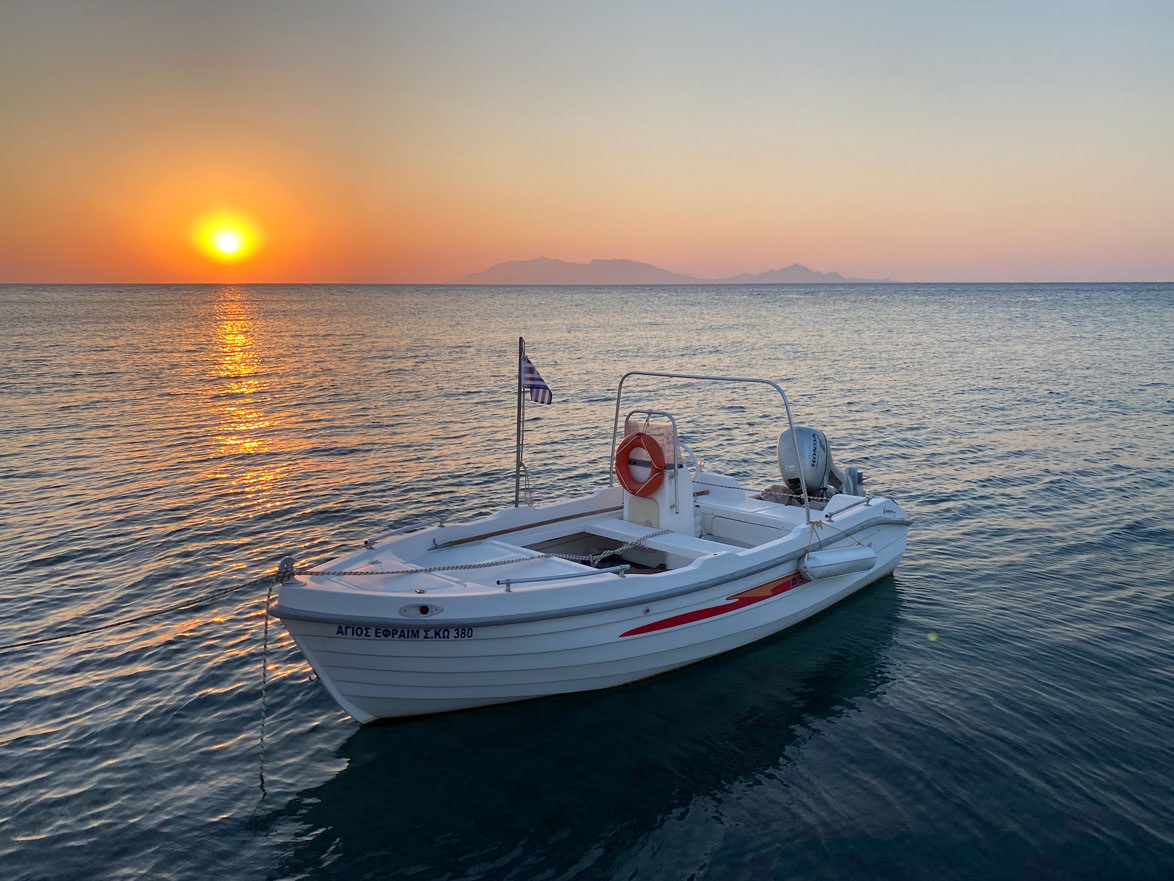 The village of Kardamena was not far from the hotel where we stayed for Natasha and Rob’s wedding.  It is a small resort with an attractive harbour and a big heart.  I was very impressed with the place.  It has many backstreets which are pleasant to stroll through and are relatively cool in the midday sun.  The harbour front contains many bars and restaurants which come alive in the evening.  Every morning, I ran into Kardamena and took many iPhone pictures which often included the sunrise.  This did depend on whether I got up in time.

The light on the Island is best in the early morning when the first rays break though over the waters.  At night the sun sets behind a small mountain ridge but some of the last rays of the day still make for a pleasant picture.  In the town we ate at several restaurants and the food was always tasty and delicious.  It was also good to drink Retsina again which I know is an acquired taste but it brings back memories of my time Greek island hoping when I was a student.  These are some of the pictures that I took which are all on my iPhone. It was not practical to bring the grown up camera out on either a run or in the evening when alcohol was flowing.  However I know that I will visit Kos again taking my cameras to catch the beautiful light.

The final picture is not in Kos but taken at the Sunset Taverna in Zia on the mountains.  It was an adventurous journey in the mini bus up and down the steep mountain roads from Kardamena to Zia but as the picture shows is was worth it for the sunset. This was taken with my Canon 5D with two pictures stitched together. 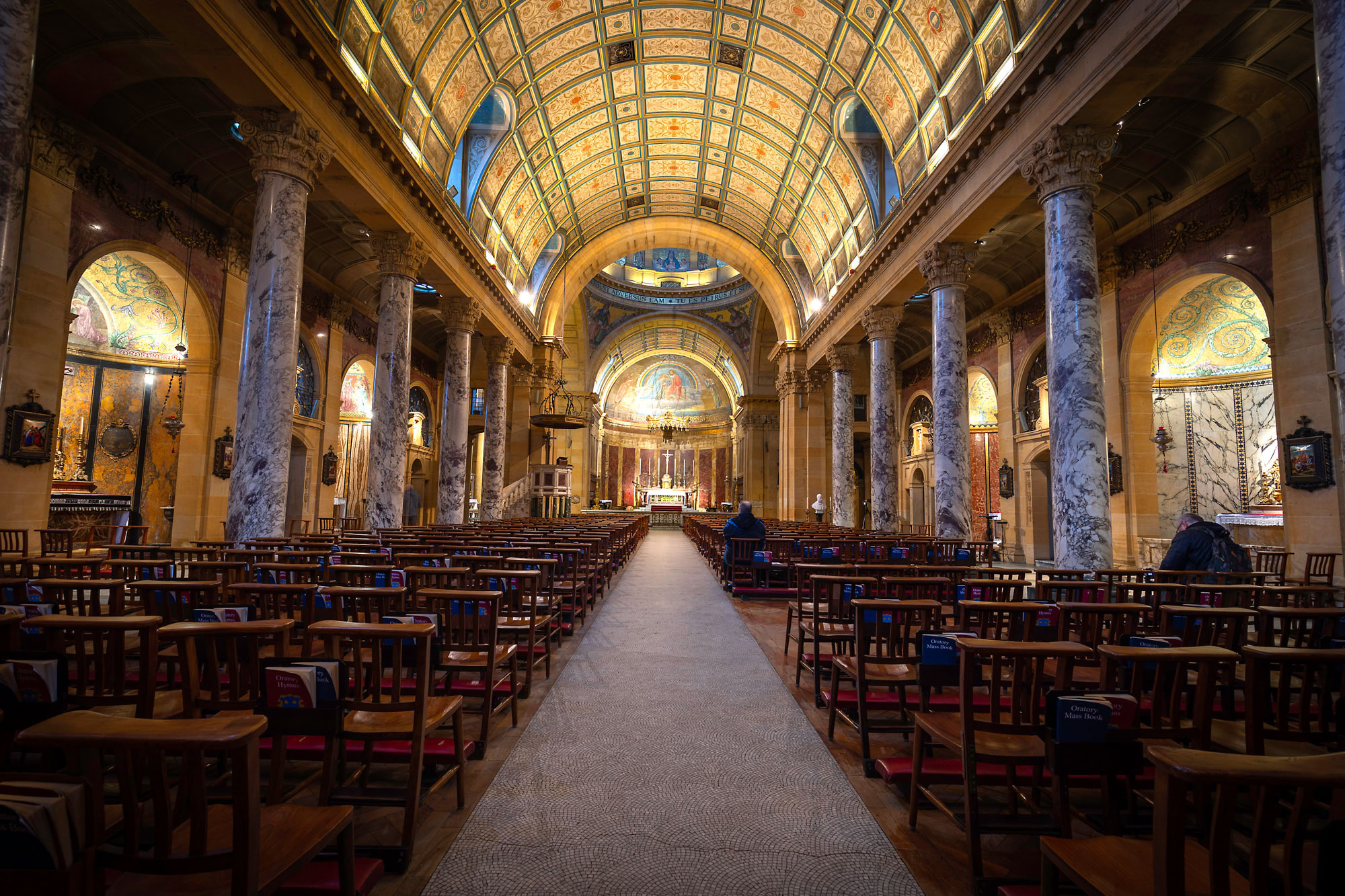 I have never been inside The Birmingham Oratory during my time in Birmingham. This is surprising given that I am a Catholic and visited several churches around the West Midlands. Therefore I was very pleased that one of my photographic friends Kevin Maslin had arranged with Brother Zechariah of the Oratory to hold a photographic meeting there. It was under the Brumtograpahy meeting group. I will have a separate post on that in later weeks.

It was a cold rainy day when we arrived at the Oratory and there were 10 enthusiastic photographers all ready to go. The Cloisters outside the Church were interesting to photograph and immediately you could sense St Cardinal Newman’s presence in the statues around the outside of the church. When I got my first glimpse of the interior it was with excitement and awe. The church is in an Italian style and the light streams accentuate the high domed ceiling and the numerous side alters.

There was a christening taking place so whilst that was taking place, I took the opportunity to visit the Cardinal Newman museum. There were relics and momentoes of his time in Birmingham. His chalice and Cardinal’s hat. I did have the pleasure of visiting Univeristy College Dublin Newman House, located at 85–86 St. Stephen’s Green a few years ago and it was interesting to link these to his activity in Birmingham. I found some of the exhibits really fascinating including a wig of his hair, following his illness with Cholera. The picture depicting him talking in the centre of Birmingham caught my attention and I loved it that he could hold an audience with his wit as an orator. His glasses and various letters were on display. It is a very personal and engaging museum.

We also toured the vestry where the priests get ready before mass. The Cardinal Newman chapel was bright and colourful.

The oratory is beautiful and I took so many pictures using a full repertoire of cameras. Wide and telephoto lenses. I included my lens ball as well in the pictures. 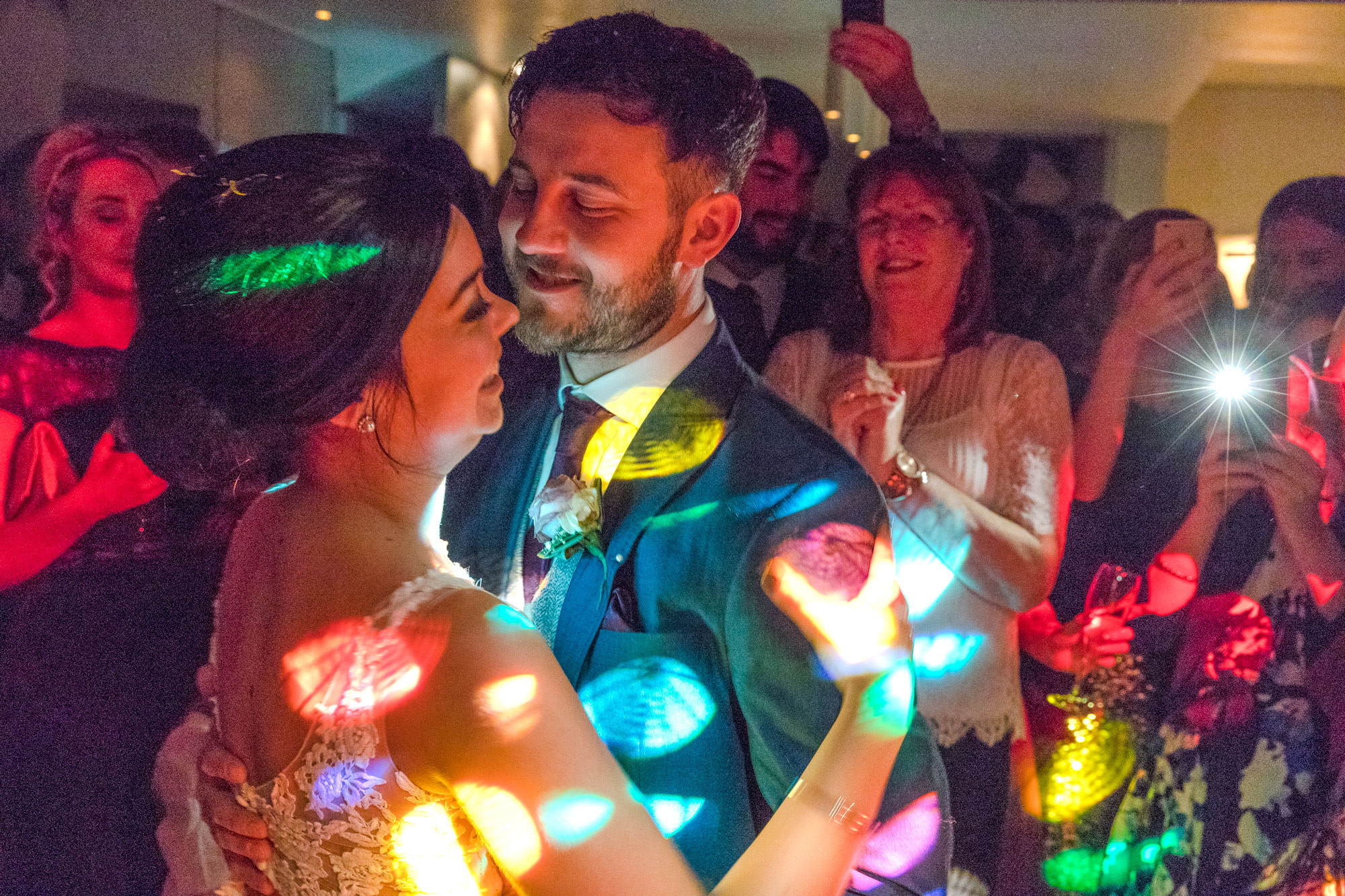 Siân, my youngest daughter, got married to Jim Bruce and I was able to take a few photographs during the day.  We did have an official photographer and VJ is brilliant but I brought along my Sony RX100V5 for the ceremony and then my Canon 5D for the final part of the night.  It was a great opportunity to get some candid pictures. Weddings are fun but I would not wish to be an official photographer as I would be worried about making sure that I had the correct pictures and had not missed any of the important ones.  Here are a few of my better pictures that I took and I do love those ones that are showing a packed pub.  Everyone was having a great time and it shows.  The wedding was at St George and St Teresa and the reception was the Bell in Tanworth in Arden.  For those interested, my speech went as well as can be expected 🙂 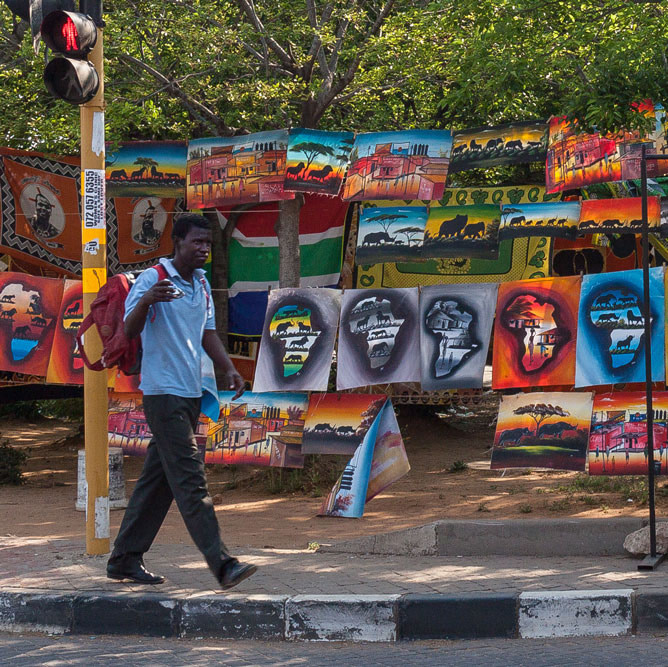 Johannesburg is a city of contrasts, there are sharp differences between the rich and the poor. I was there for a conference and my first impressions were favourable as the train to the hotel was straightforward and moved through a fascinating landscape.  There were old fashioned power stations and houses scattered well into the distance.

Our hotel was in a well protrolled shopping area which would not be out of place back home. However when taking the coach to the University of Johannesburg we could see a great deal of begging taking place at the traffic junctions. We did get a chance to see the area including the townships as one of the lecturers Kris showed us around. He had a great knowledge of football and took time to show us the townships around Spohia Town where several premier footballers started out.  Sophia Town also had the chilling history of being one of the first sites where people of different colour were moved to the townships.

This wonderful statue was on Constitutional Hill.

Another interesting place was near to Melville and it was called 27 boxes. It was a container village that had become a centre for arts and crafts. There were many small businesses located there.

Our conference reception was a very interesting affair and we were greeted by a lady playing the violin in a plastic bubble. There was even someone dressed as a table serving desert. These were students of the Hospitality and tourism and they were eager to please.

At the official dinner we were treated to some fantastic African dancers.

Although there was work to be done in the conference, we did have a day out to visit Soweto and visited the Hector Pieterson Museum and Nelson Mandela’s house, 8115 in Soweto. All very memorable places to visit. On the final day after the conference finished, we jumped on the hop-on and hop-off bus.  It gave use the chance to visit Constitutional Hill and the Apartheid Museum both of which raised stirring emotions not only of the period of British rule but also the past transgressions of the White government that imposed the evil of apartheid. The present society is fractured but it is trying its best to rectify itself and move forward.  I left with some incredible memories of a place that is so different to normal cities that I have visited.