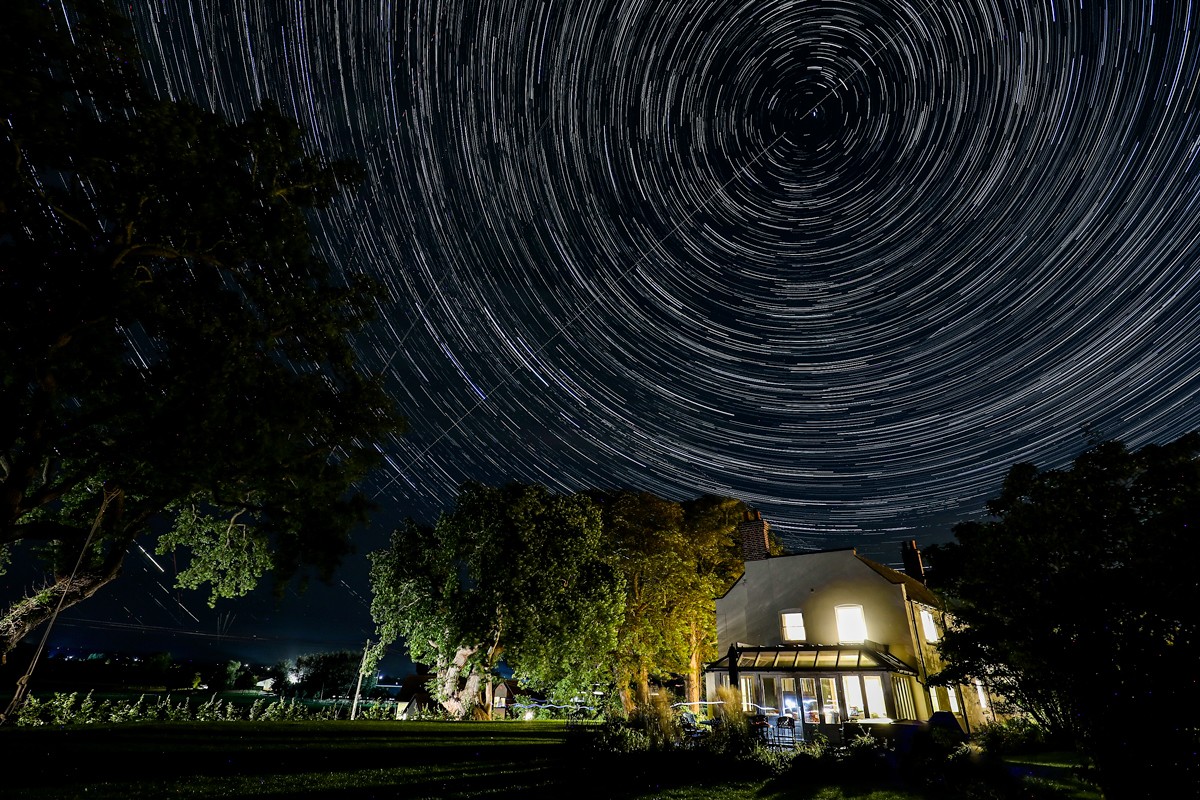 Living near Birmingham, any night sky photography is severely limited due to light pollution.  During lockdown there was the chance to undertake star trail photography and I featured this in a previous article on my website “Stars in the Sky”.

In 2022, our family holiday was deep in the Herefordshire countryside at Swinmoor House, Madley.  We were blessed with several clear nights with little cloud cover.  I had never seen so many stars up above for a long time.  Such clear nights were a great opportunity to get back into taking pictures of the stars.  I use the StarWalk2 app which has a virtual view of the night sky.

Setting up the camera on a sturdy tripod, I am considering 3 settings.  For the aperture, I wish to get as much light as possible, so I set my camera at f/2.8.  For the shutter speed, I need a long exposure and 25 seconds is selected.  Any longer and I would start creating star trails which would show the stars as lines. I will come back to this later.  To allow sufficient sensitivity, I set the ISO at 800.  My camera is a Canon D5 mark IV and the lens is a Canon EF16-35mm f/4L.  The wide angled lens captures a broad viewpoint which is useful when featuring the sky in the photograph.

Firstly, I do a few test shots with the ISO set at 32,000 to provide viewable pictures of the scene and allow me to compose the picture with a strong foreground object which in this case was Swinmoor House.  Also, I turned off as many lights in the house as possible but balanced the need for some to provide a focal point for the picture.

The first picture is of Ursa Major which was very bright and identifiable in the sky.  It is also nicely framed by the surrounding trees and the house.  The second picture was the night sky looking out over the Sagittarius star cloud better known as the Milky Way.  Unfortunately, there was some cloud cover and light pollution in this direction.  However, you can make out the milky way in the picture. These were the best pictures I could get during the week of the Milky Way due to cloud cover.

Editing was done on the RAW files correcting the lens profile, adding contrast and bringing out the shadows.  Next I reduced the highlights and took the strong house lights down.  The Ursa Major stars were bright and I helped a bit with some dodging.  Finally I produced good pictures of the night sky.

Two nights later there was another clear sky and this gave me the opportunity to have a go at star trails.  The camera set up and composition was as before although this time the exposure was increased to 30 seconds.  The Canon camera has a built in intervalometer which I set at 1 second.  Therefore, the camera shutter would be open for 30 seconds, shut, quickly process for a second before opening again. This continuous cycle was possible as I had a fast SD card in the camera for the processing of the pictures. Once I was happy everything was working properly, I left the camera to take the pictures.  I was very tired and started at 10.30 and eventually after a few rounds of pool in the games room, switched the camera off at approximately 11.45.  I am sure I could have gone for a longer time period but it would have meant leaving an expensive camera unattended during the night.  The next morning, I collected all the jpg pictures (124 of them) into one folder.  I downloaded the StarStaX freeware software and pasted the pictures into the program.  I clicked a button and watched in amazement as the stacking software created the picture.  There were a few edits required to remove stray light and the picture was cropped to provide a pleasing result.

The resulting picture looked great.  A couple of satellite trails had crept into the picture and add some nice diagonals. I wish I had not gone to the bathroom during the picture taking as the light from that particular room is very bright.  Another wish is to have taken more pictures to get stronger lines for the star trails.  Then again, the pattern created is very eye-catching with a strong foreground image of the house setting off the trails nicely.  You can see Polaris the North star plus a couple of satellite paths moving diagonally across the picture. What is helpful is the large number of stars as they provide a denser number of star trail circles compared to my previous attempt. 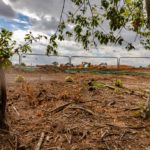 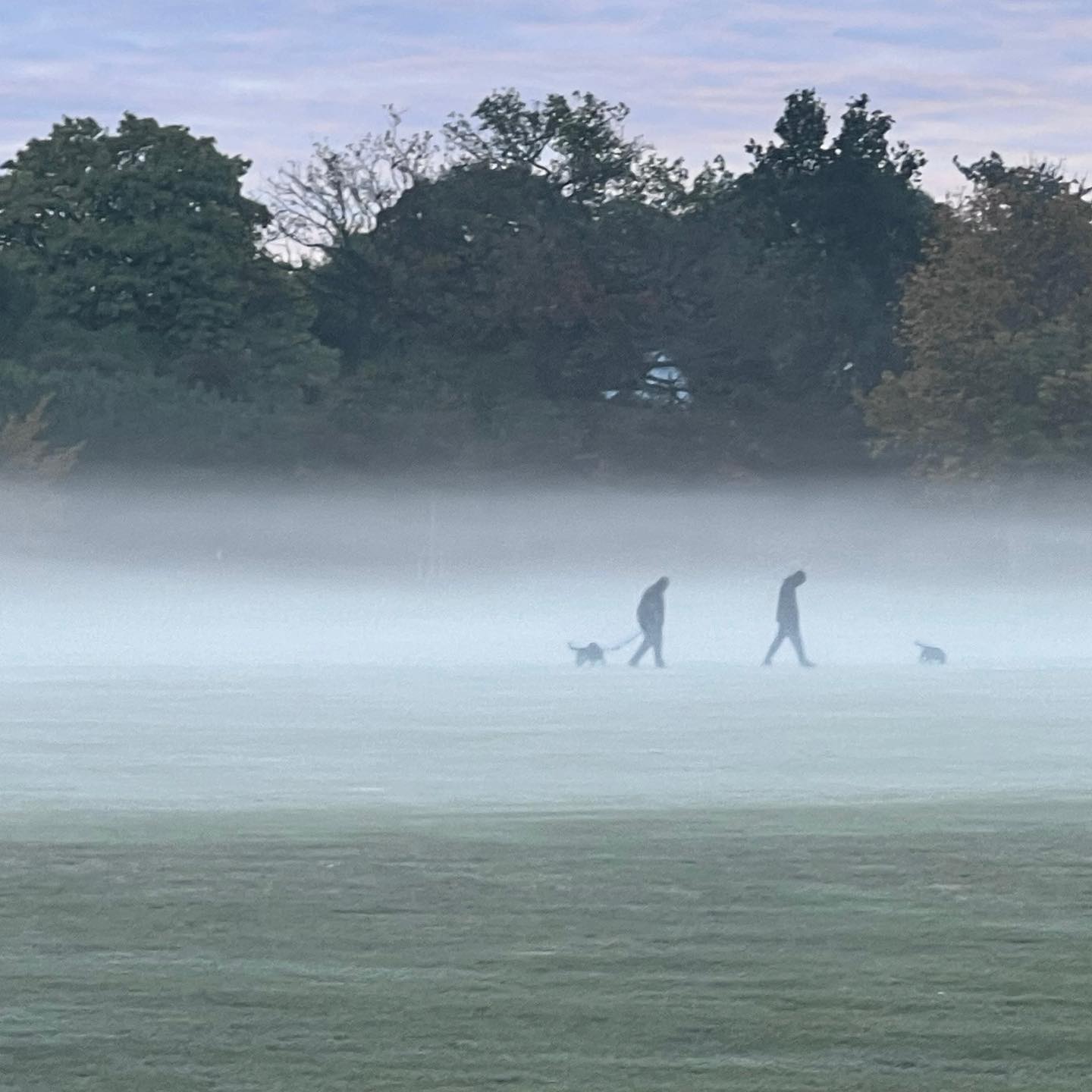